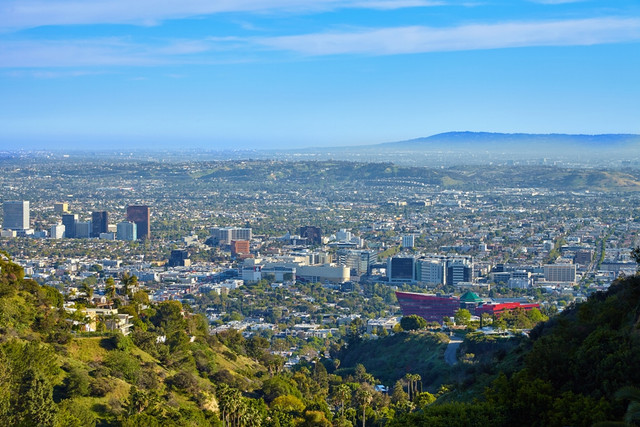 We at Royal Moving Company are dedicated to helping our customers have a smooth and worry-free move to West Hollywood every step of the way.

Among West Hollywood movers, we are well known for our clean, efficient service. Others movers out there may charge you cheap rates, but they can also cause you headaches, like damaged or lost belongings. And they might also hit you with unexpected charges.

There is no need to worry when you hire safe, professional and dependable Royal Moving Company. The next time you move to a new residence, just leave it to our expert West Hollywood moving crew.

Need help preparing for your move? Royal Moving has you covered. Sit back and let our team of professional packers pack your belonging with gentle care. We will handle your property safely and securely and place everything onboard one of our modern moving vans. Even if you supply the truck, we can help you pack and load all of your precious cargo. Then do the driving yourself, if you choose. We are even available to meet you at your destination within the West Hollywood area and do the unloading for you.

Call on Royal Moving Company to make your move easy and hassle-free. We are one of the top moving companies in West Hollywood. That is because we go the extra distance for you, every single time! Call us, and forget your worries about packing, loading and getting your belongings safely unloaded at your new home. We are your moving solution!

West Hollywood, California, is acceptingly liberal and inspires bold individualism, and eclectic creativity, with late night entertainment and appeal. "WeHo," as it is often called is everything from stylish to glamorous to completely audacious, while being welcoming and warm.

There is great shopping and dining, urban décor, and a number of gay-friendly businesses that blend together along famous Sunset Strip into the late hours and early morning, or you can take stroll around the Melrose District when the sun is out. West Hollywood is also home to many of iconic hotels, infamous music venues, and raucous comedy clubs. West Hollywood certainly provides a melting pot of opportunities with its couture fashion, street entertainers and art, and statues. However, there is also Runyon Canyon, which offers one of Los Angeles County's most beautiful hikes. The residents are mostly creatives, along with young professionals, and a mix of celebrities. Housing includes low-rise apartments and unique single-family houses on side streets that include homes with beautiful architecture.

West Hollywood has a population of 35,661 people, with a median age close to 40. The  median household income of its residents is $61,127, and the median property value is $642,200, but home ownership is very low, at 20 percent. The population of West Hollywood consists of a citizenry that is 74.2 percent White, 11.8 percent Hispanic, and 5.15 percent Asian.

West Hollywood has a flamboyant present as well as a past. In the 1920’s, gambling was illegal in the city of Los Angeles, though it was legal in Los Angeles County. At the time, West Hollywood had yet to be unincorporated, so casinos and nightclubs popped up around the area that would late become Sunset Strip. Although the gambling is long gone (outside of hidden backrooms), West Hollywood held onto its raw, bright, and ubiquitous energy and infamy.

Then, late into the 1960s, West Hollywood became America's music venue capital, as historic spots like the Whiskey A-Go-Go and the Troubadour opened to welcome renowned musical acts, or launched new musicians and bands into the pop culture stratosphere.

Then, on November 29, 1984, West Hollywood went from being an island community, surrounded by Los Angeles proper and Beverly Hills, to a full-fledged incorporated city.

There are many services and organizations worth knowing about as a new resident of West Hollywood. Here is some valuable contact information that you might need in order to settle into your new residence in West Hollywood. The contact list includes utility companies, community service associations, recreational facilities, as well as important state and local government organizations.